Yellow Mold In The Home

When thinking about the color of mold, what color comes to mind?

I bet not yellow!

Guess what, yellow mold is not uncommon. This is especially true on water damaged building materials.

But can yellow mold harm you? It is as dangerous as some of the other molds that produce other colors?

What Is Yellow Mold?

Yellow mold, aka yellow slime mold is a single-celled organism that is not technically a fungus, but is instead a slime mold. It is one of the more common colors of slime mold and can be found in various environments such as mulched garden beds and on moist surfaces such as wood, paper and cardboard.

As with any color mold, there is no specific species of mold to describe yellow mold. Yellow is just the appearance of the mold itself.

Certain types of Yellow mold are referred to "slime mold". This is not the type of mold we are referring to as you normally won't find slime mold indoors.

More than 900 species of slime mold occur all over the world. Their common name refers to part of some of these organisms' life cycles where they can appear as gelatinous "slime". This is mostly seen with the myxogastria, which are the only macroscopic slime molds. Most slime molds are smaller than a few centimeters, but some species may reach sizes of up to several square meters and masses of up to 30 grams.

They feed on microorganisms that live in any type of dead plant material. They contribute to the decomposition of dead vegetation, and feed on bacteria, yeasts, and fungi. For this reason, slime molds are usually found in soil, lawns, and on the forest floor, commonly on deciduous logs. However, in tropical areas they are also common on inflorescences and fruits, and in aerial situations (e.g., in the canopy of trees). In urban areas, they are found on mulch or even in the leaf mold in rain gutters, and also grow in air conditioners, especially when the drain is blocked. 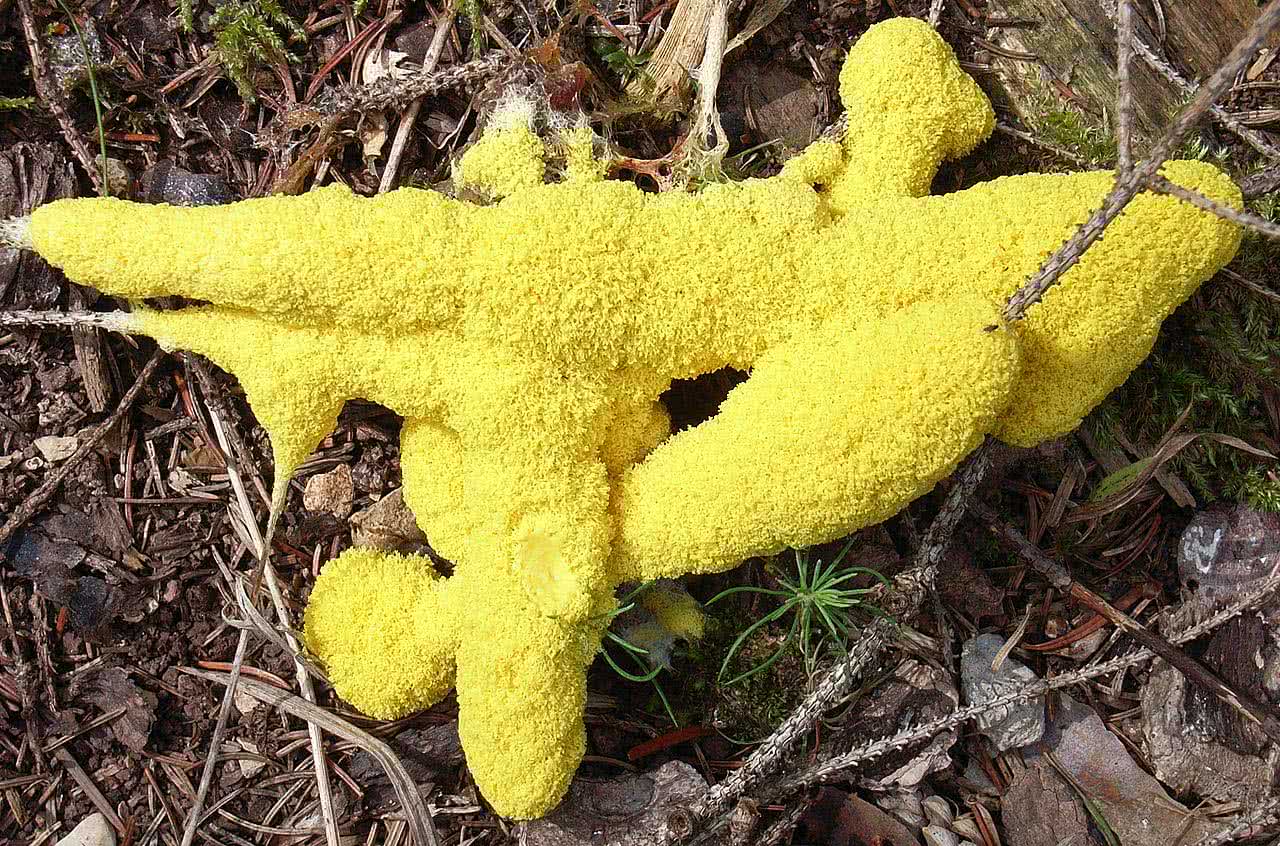 This is not the type of mold we are referring to as you can see because this is typically growing outdoors. We are more concerned about yellow mold growing in your home.

There are certain species of mold that are linked to yellow mold. Those species are:

Aspergillus is a very common mold spore in hot/humid environment. It is typically found both indoors and outdoors.

You do not want Aspergillus actively growing in your home due to water damage! You will typically find yellow Aspergillus of drywall when present indoors.

It's a rule of thumb that when Aspergillus is yellow it is toxic, but it should be taken as if it may!

Serpula Lacrymans has a nickname called the "Home Eater". It got it's nickname from causing dry rot on wood.

You mostly won't see this type of yellow mold in the living space unless its causing dry-rot on furniture which is pretty rare.

Cladosporium will mostly appear as white but it is not out of the ordinary for it to have a yellow tint.

More often than not, you will see Cladosporium as surface mold that can easily be cleaned when it is yellow.

There is one substance that yellow mold is often mistaken for...

If you don't know what Pollen is, Healthline.com describes it as:

Pollen is a very fine powder produced by trees, flowers, grasses, and weeds to fertilize other plants of the same species. Many people have an adverse immune response when they breathe in pollen.

If you are noticing yellow "dust" there is a good chance that it's pollen and not mold.

The only way to know for sure would to have the mold tested.

How To Clean Yellow Mold

If you are just seeing yellow dust on your counter, just clean up as if it were dirt.

As stated above, in all likelihood it's going to be pollen, especially if you had your doors or windows open.

The only time you will need to have yellow mold removed by a licensed mold abatement professional would be it you see yellow mold growing on water damaged building materials.

If you see yellow mold on wood rot, it may need to be removed as well.

Keep in mind if it is structural wood, you will need to consult a licensed engineer first!

How To Prevent Yellow Mold

Mold spores are in the air just about everywhere. It's not something that can easily be stopped or even necessary of being stopped. There is more mold outdoors than indoors in clean environments. You 100% can't control mold outside, but you can control mold inside to a certain extent.

The only way you can prevent a mold problem in your home is:

Those mold spores need moisture to feed on. If you keep your home dry, mold won't grow on any of your belongings or building material!

Look Mold provides a platform that allows consumers to submit requests for Mold Inspections, Mold Remediation, other related services. Look Mold does not provide any mold services or materials. The mold contractors, companies, and/or service providers operate independently from Look Mold and do not constitute any form of partnership, joint venture, agent-principal, or employee-employer relationship. Estimates you receive may vary based on the nature and scope of the work requested, location of the work site, as well as other factors. As with any home improvement decision, you should carefully review each estimate you receive for accuracy and completeness, and independently confirm the status of any mold professionals' license. Please review our Terms of Use and Privacy Policy before submitting any request for services.
Contact | Privacy Policy | Terms of Service
©2023 Hot Key Media LLC, All rights reserved