White Mold Expert Reveals The Danger Lurking In Your Home

What You Need To Know About Green Mold

Red Mold Alert: The New Scary Mold Your Loved Ones Need To Avoid

Mold in your home, on your food, etc

Mold is a fungus, and it grows virtually everywhere on Earth.

Lately, mold has become a hot topic because of increasing awareness about its potential health hazards.

The good news only a handful of these species are commonly found indoors.

Some of these different types aren’t dangerous to human health, while others lead to chronic and severe health conditions.

When addressing any mold growth in your home, it’s important to understand which type of mold you’re dealing with.

Each one has its own characteristics, growth patterns, and health effects to be aware of.

It’s also necessary to be aware of the common places to find mold in your house so you can prevent the spread of these harmful and toxic substances.

Check places like bathrooms, basements, roofs and windows for harmful mold growth. Here are some of the most common types of molds found indoors: 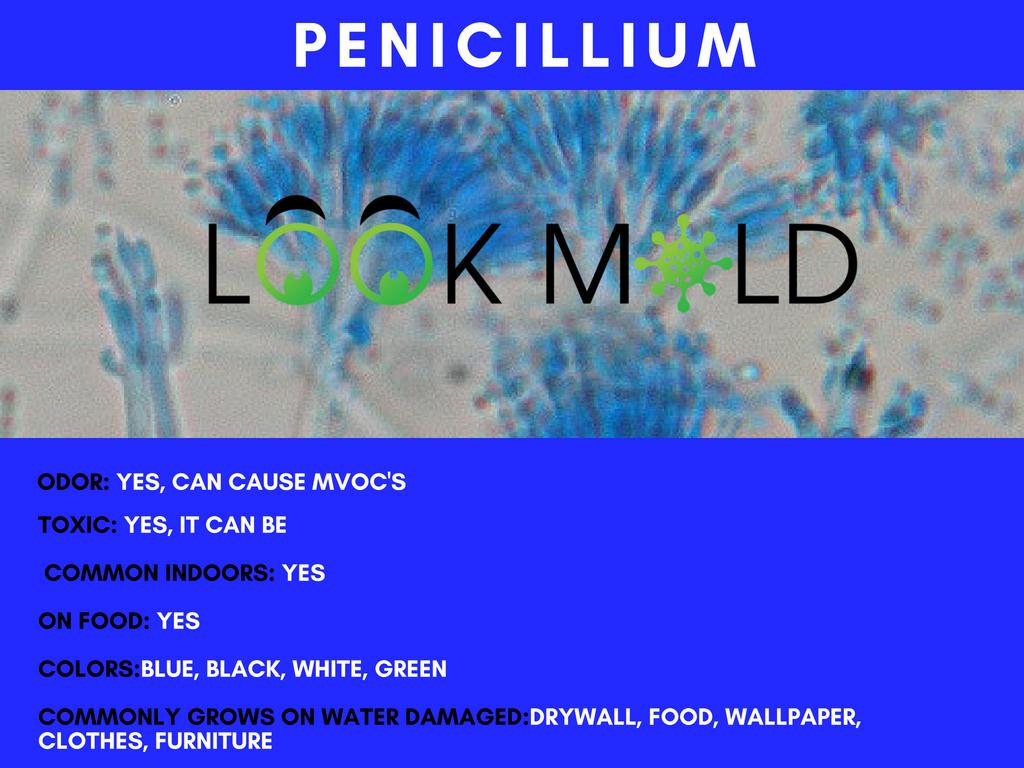 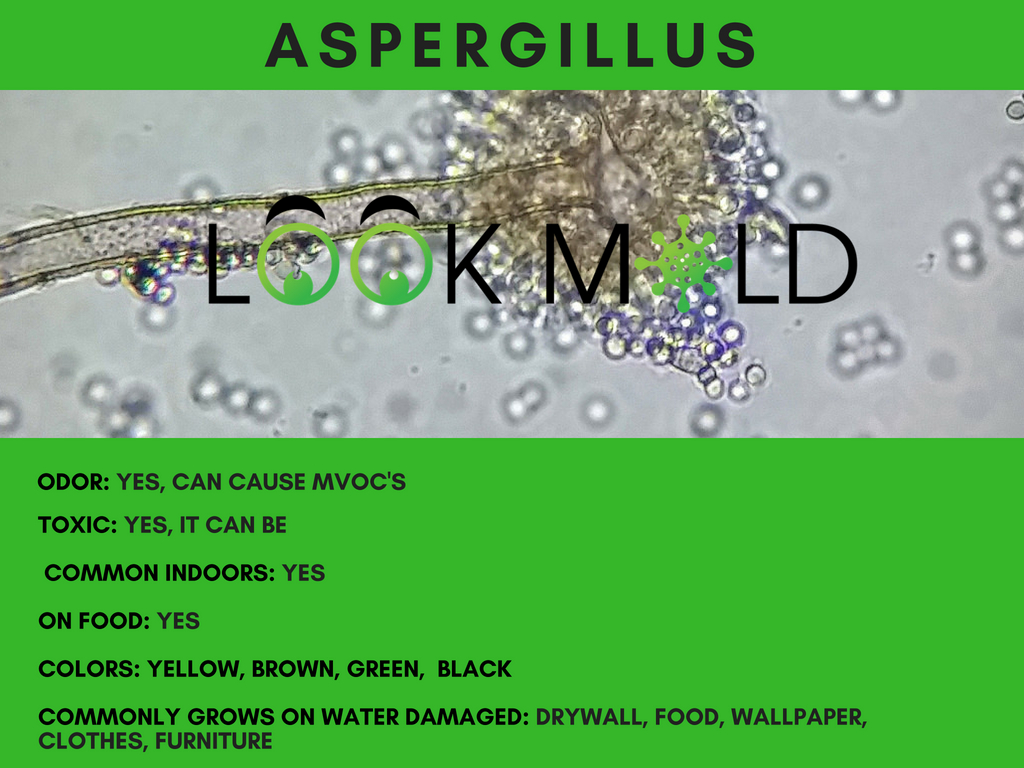 Aspergillus mold is usually classified the same as Penicillium because it is so hard to differentiate the two under a microscope. It is also very commonly found indoors as well as outdoors. For the most part, Aspergillus will be allergenic, but there are a few strands that can become toxic. It is known to cause upper respitory issues in humans when present in large amounts. Aspergillus is very fast growing, It is one of the first species of mold that will start growing on water damaged walls and contents throughout the home. Aspergillus will generally be yellow, brown, green or black. 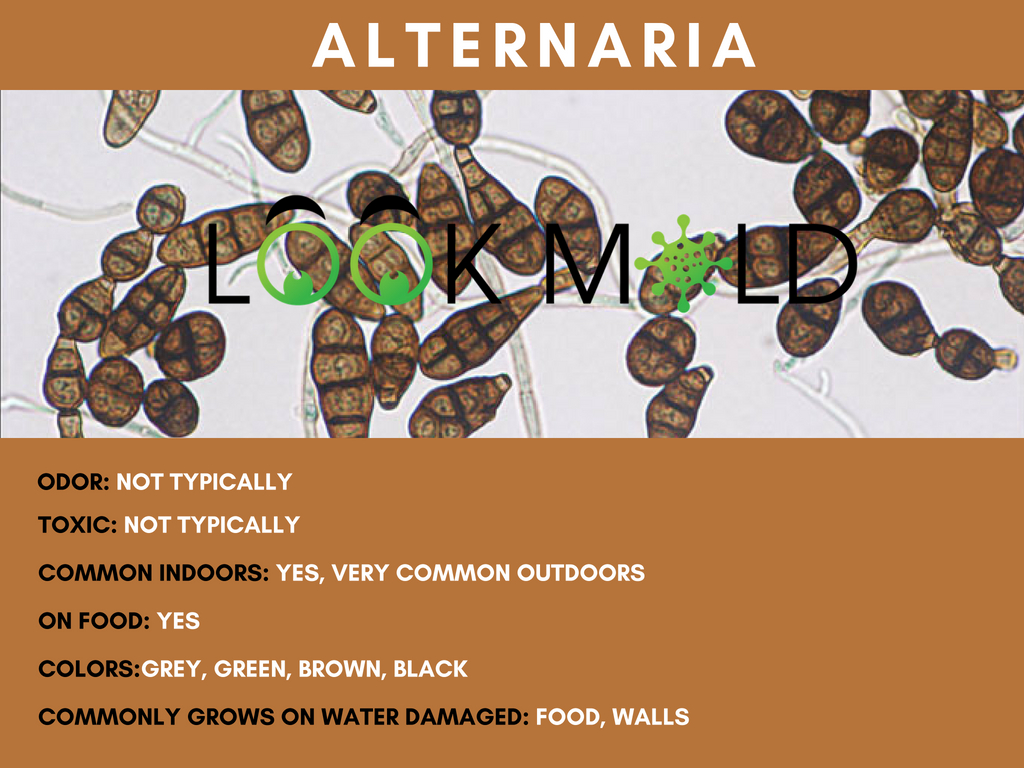 Alternaria is considered one of the most common species of mold in the entire world. It can show up indoors but is much more common outdoors. When found indoors, it is mostly found in the bathroom and can easily be cleaned. However... Alternaria can also be found on water-damaged building material. While it is an allergenic mold, it can cause some unwanted symptoms in humans and animals such as upper respiratory issues. Alternaria will usually appear as green,grey or brown. 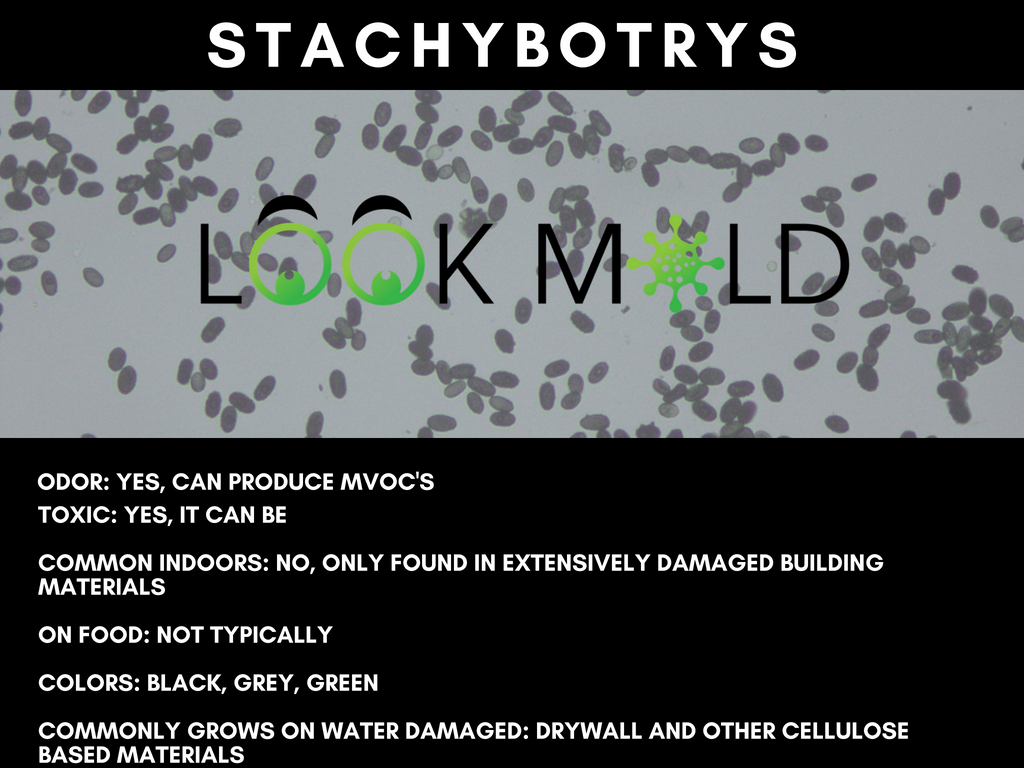 Stachybotrys may as well be known as "The King Of Molds". When you hear the term Black Toxic Mold, it is being referred to as Stachybotrys. Stachybotrys is considered a slow growing mold that needs a ton of water over an extended period of time to grow and thrive. Stachybotrys itself is not toxic, it is the mycotoxins it produces. Serious health effects have been linked to Stachybotrys... Meaning: If you have any of it growing in your home, it needs to go! And it needs to be done by a licensed mold remediation professional as trying to remove Stachybotrys yourself can make the problem even worse! It can be lethal for infants and people with compromised immune system Stachybotrys will usually be black or green in color. 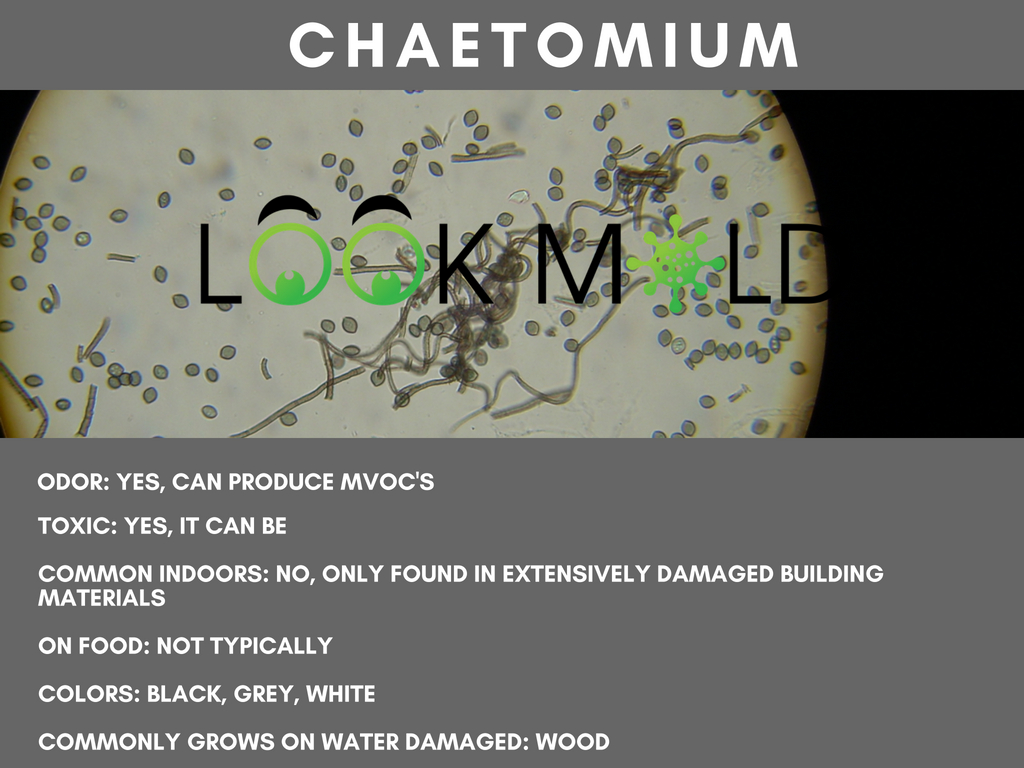 Chaetomium mold may not produce mycotoxins to the level that Stachybotrys does, but you do not want to fool around with Chaetomium because it absolutely can cause mycotoxins. It is also known to possibly cause nail infections. Chaetomium tends to be found in areas of water damaged wood such as carpet tack strips, roof sheathing and furring strips. Chaetomium will grow only on heavily water damaged building materials. It will usually appear as white, black, or grey. If you have Chaetomium in your home, it needs to be removed ASAP by a licensed mold remediation professional. 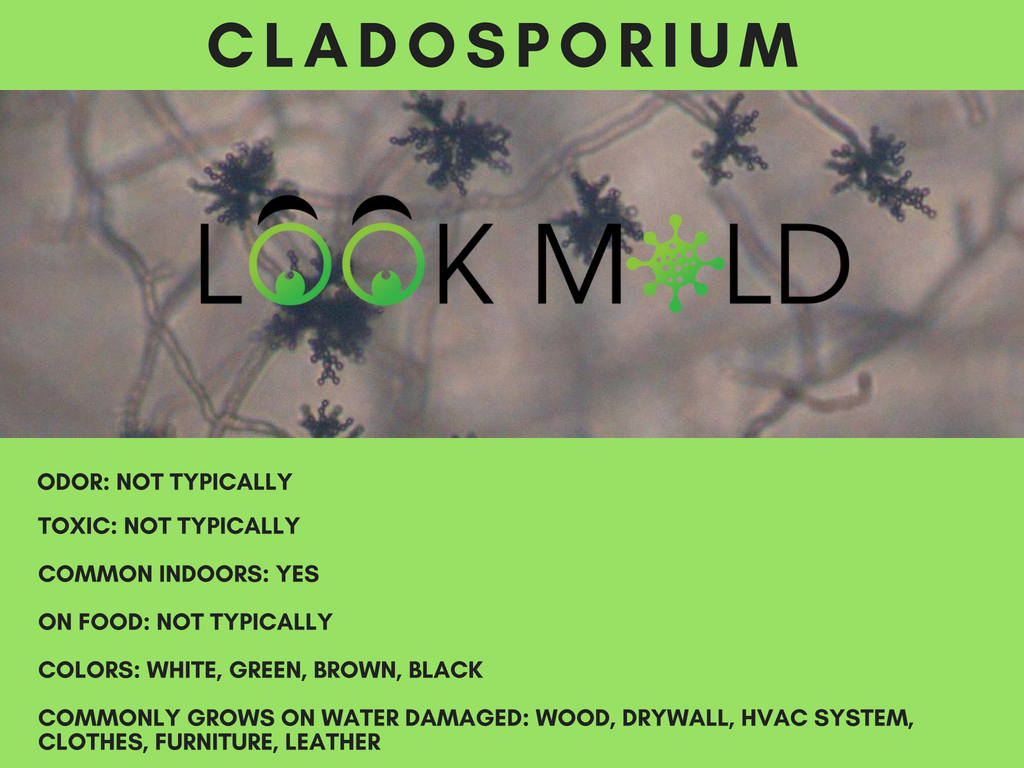 Cladosporium is extremely common indoors. It is also very common outdoors. It can usually grow in colder climates than most species of mold. Cladosporium is commonly found within the HVAC system. It grows on dust with ease. You know those little white spots you see on some of your shoes or leather items? Say hello to Cladosporium! Cladosporium is not known to be toxic but it can cause upper respiratory issues in people that have allergies to it or have an at-risk immune system. Cladosporium shows up as green, white, black, and even brown. You don't want Cladosporium in your home in large abundances. 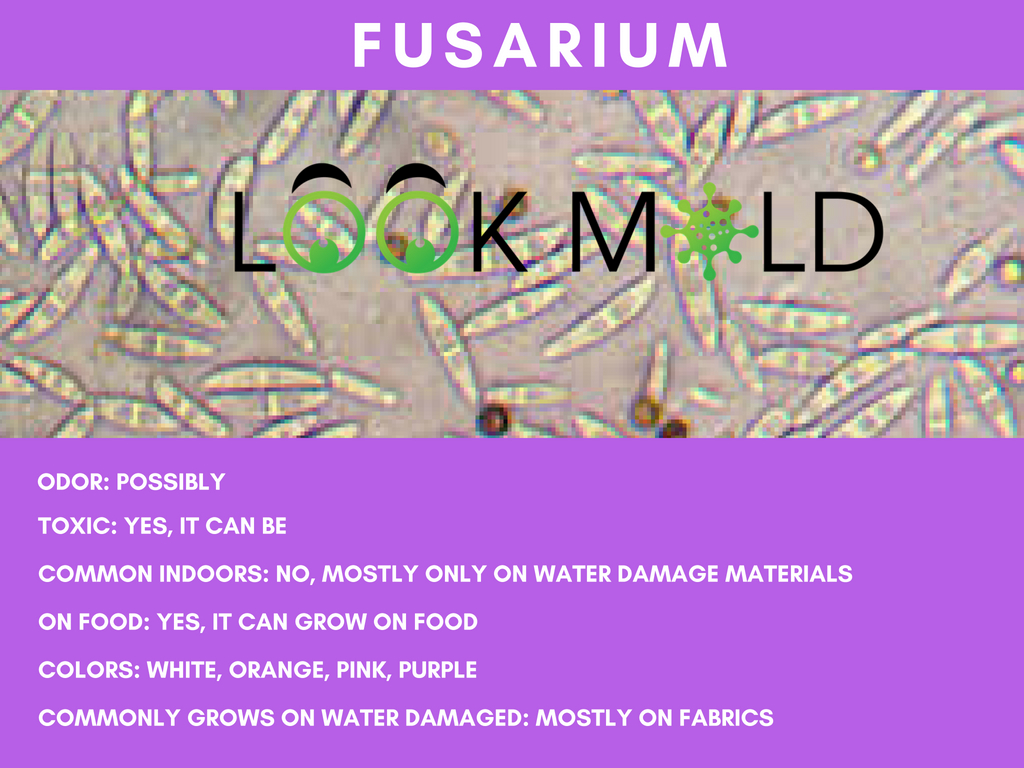 Fusarium is one of the bad guys you do NOT want to see growing in your home. It has been called the "what" mold. Why is it called that? Because there have been reports linking Fusarium to short-term memory loss. Fusarium can grow in colder temperatures. It can absolutely be toxic so it needs to be taken seriously. Fusarium can be grow on cellulose based building materials but is more commonly found on fabrics. It also found in some food. Fusarium can be pink, orange,white, or purple. Fusarium can spread quickly through the home which is another reason to dry up any water damaged building materials very shortly after a flood! 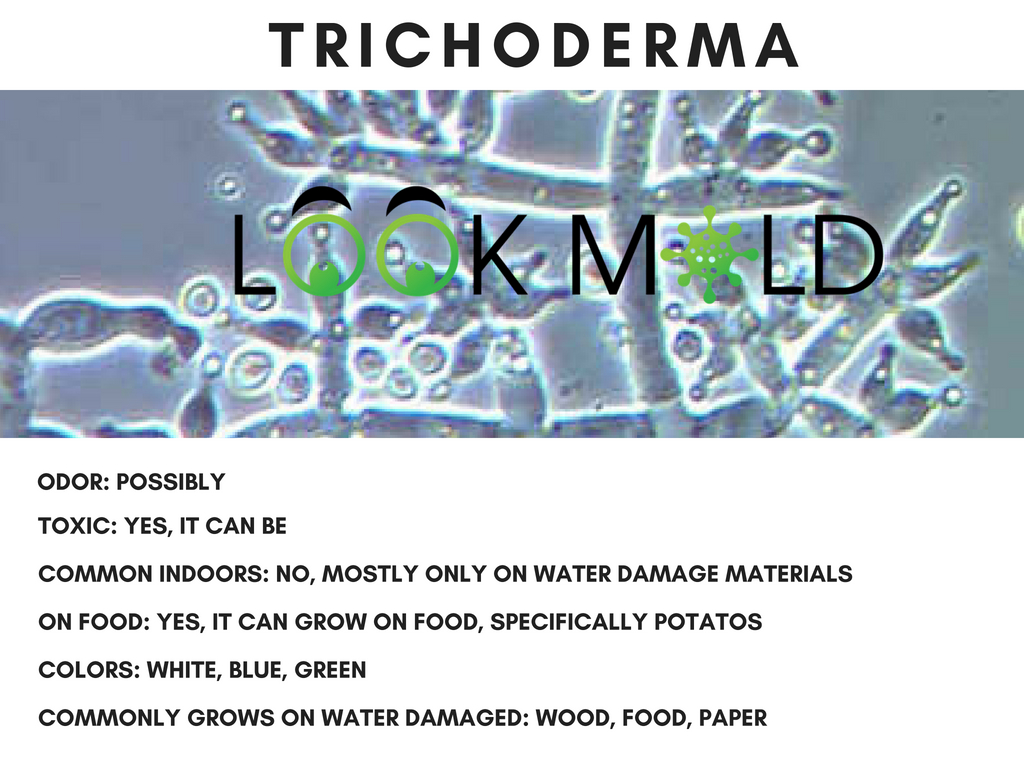 Trichoderma in the home can be a nuisance. It is very fast growing mold that grows on wet surfaces such as wallpaper, carpet and porous furniture. It abosolutely destroys wood as well. It is NOT a mold you generally want to see indoors. Trichoderma can be both allergenic as well as toxic. When it does produce mycotoxins, it can act very much like Stachybotrys on building materials. Trichoderma can be very dangerous for people on dialysis as well as liver transplant recipients. Certain strands can show up on food, specifically sweet potatoes. Trichoderma will usually be white, blue or green in color. It THRIVES on wet, porous items, so if you have a leak, don't let the water sit too long without drying it! 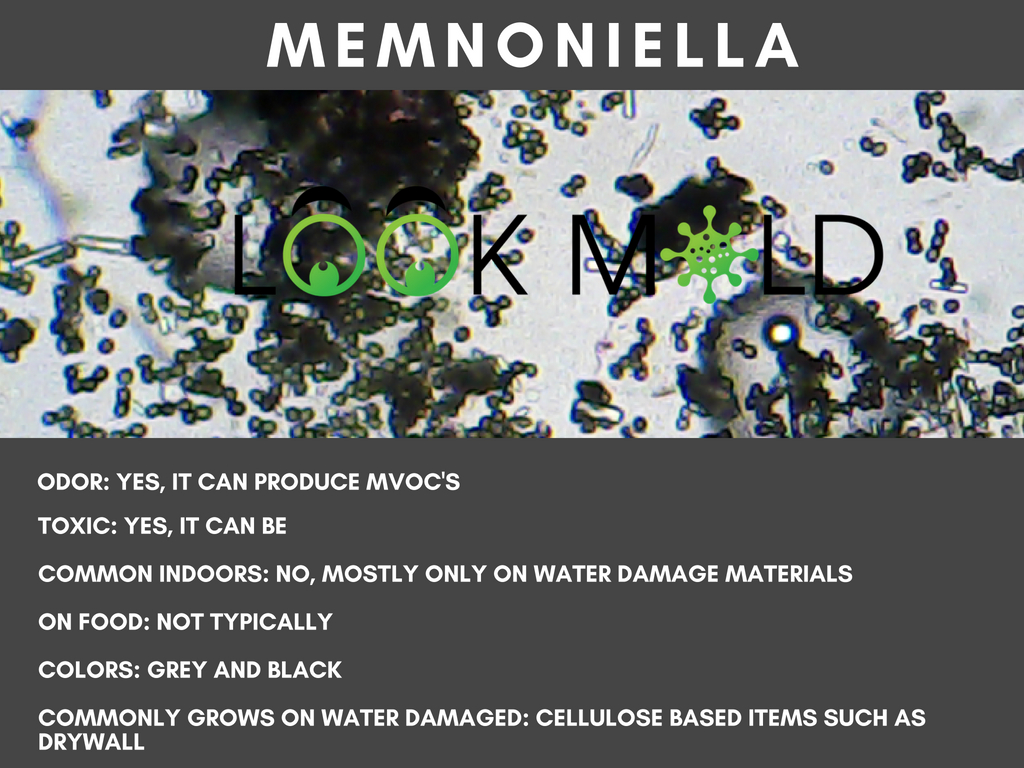 Memnoniella is very similar to Stachybotrys. I guess you can say it's Stachybotry's evil brother! Not as much is known about Memnoniella, however, there is one thing for sure... It can be very dangerous! It produces mycotoxins and can have some adverse health effects on humans who breath or ingest it. Memnoniella thrives on cellulose-based products such as drywall. It is very dark grey or black. Memnoniella is very slow growing. If you had Memnoniella in your home, it did not get there over night! It simply needs to be removed by a licensed mold extraction company. 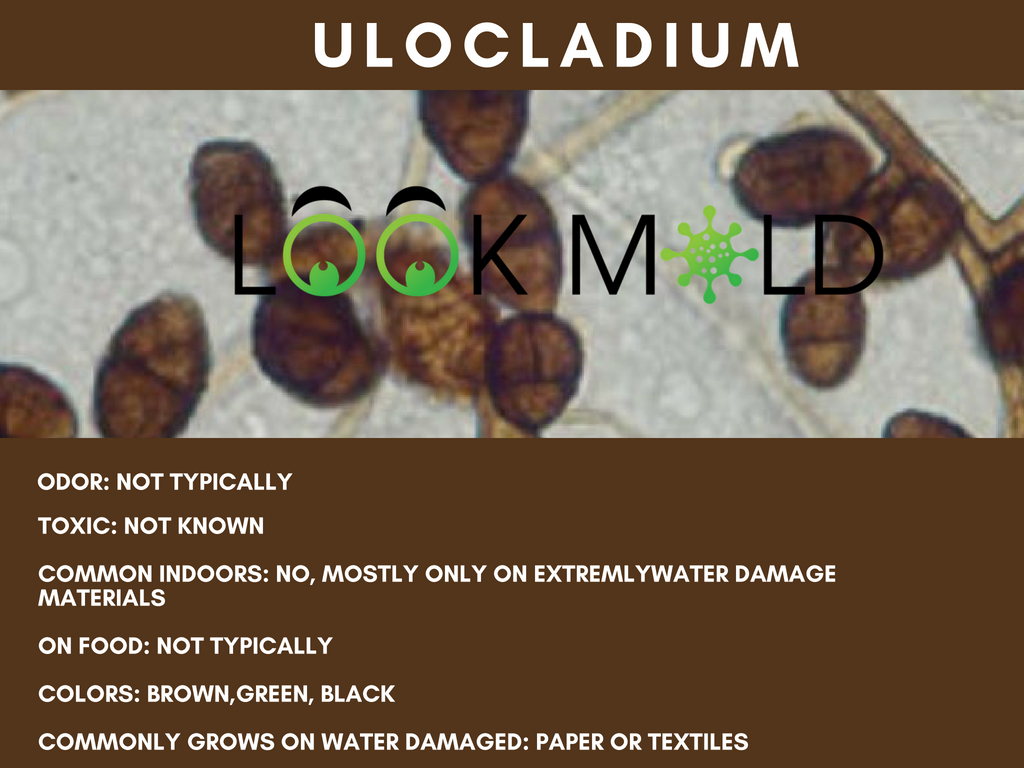 As with most species of mold Ulocladium loves it some water! It needs much more water than other molds listed above! That is why Ulocladium is not as common as most of the species on this list. It tends to be present in textiles and paper products. Ulocladium is very commonly found on particle board when it gets severly water damaged. Ulocladium does not produce any known toxins but can still affect humans. It is known to produce a possible tissue infection. You will generally see Ulocladium appear as brown, but can also be black and green.