The Top 5 Air Purifiers For Mold

With people spending more and more time indoors, air purifiers are quite the popular item these days. But with so many brands on the market, there are some that simply don’t hold up when it comes to mold spores. Not all air purifiers are created equal.

Some tend to take odors out better than others, some are better at removing VOCs, etc.

However, in this article we are going to explore the top 5 air purifiers for mold and why you should consider them if you are concerned about the air quality being affected in your home or office.

What Makes An Air Purifier Work Against Mold?

While choosing an air purifier that is best in removing airborne mold spores, the following questions that fit the criteria were looked at:

• What type of filter is used (if any at all)? • What is the process used to destroy or remove mold spores? • How much area does the unit cover? • Does the unit remit any harmful chemicals when getting rid of mold spores?

But on top of those questions, I also wanted to find air purifiers that were priced correctly, built by solid companies, and any other qualities that make it a good unit.

HEPA filters are widely recognized as the best of the best filters. Most products will use at the very least a HEPA filter, even the bad ones.

But here’s the thing:

There are different kinds of HEPA filters and some work better than others.

Carbon filters are also a popular type of filter that air purifiers use. Carbon filters are great at removing odors but not so great when removing airborne contaminants. They can also act like a sponge so when they get completely saturated they can actually release particles into the air instead of working the other way around.

If an air purifier has only an activated carbon filter, it’s not a good idea to use it for mold spores. It’s fine as an add on to remove odors.

Many of the top-notch air purification systems have multiple filters.

Air purifiers will either remove or destroy mold spores. Many have similar processes as you can only remove mold spores so many different ways.

However, some units have their own twist on it whether it be using multiple filters, using a UV light inside the unit, etc.

While there are various processes that work just fine, we disqualified units that have a bad process that will not release airborne mold spores back into the ambient air, does not let off harmful chemicals, and captures as much airborne particles as possible.

Just about every single company overestimates the coverage of their air purifier. There are some variables that go into it. Not every house is the same layout, size of the ceilings or open areas. So instead of just taking the manufacturer’s word for it I prefer to rely on the EPA’s recommendations.

The amount of square feet that an air purifier covers is based on the clean air delivery rate (CADR) which is measured by cubic feet per minute (CFM). According the EPA, if your home has regular 8 foot ceilings, the coverage for an air purifier is 100 Square feet per every 65 CFM’s of power the air purification system produces.

Here is the full scale:

The job of the air purifier is to remove harmful airborne particulates, however, some purifiers out there may actually let off ozone when doing the job.

Many studies have shown that Ozone at certain levels can be extremely harmful for humans.

A popular feature on some air filtration systems is something called “Ionizers”.

Once they are not airborne they are much easier to clean up by mopping, vacumming, etc.

Well, it is, but the only problem is when negative ions are artificially made like they are in air purifiers they can let off ozone.

I know, sounds like a big bummer, but good news:

The state of California has really been at the forefront of putting state regulations in place for Ozone exposure and the amount of air purifiers. The state put in place the California Air Resources Board (CARB) to advise them. In order to be sure air purifiers let off a safe amount of Ozone they must be submitted and approved by CARB.

Before I put any of these air purifiers that have Ionizers on the list, I made sure they were CARB approved for your safety.

So, now that you have a brief understanding of what you want in an air purifier to get rid of mold, lets take a look at some of the best!

Enviroklenz is a very unique system. The manufacturer is a company out of Florida called Timilon. These units are manufactured in the USA.

The units are definitely not the best looking air purifiers on this list. They also are the loudest unit on this list, but they are certainly very effective in removing mold spores.

How The Enviroklenz Air System with UV Light Works 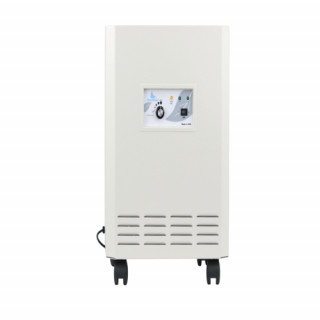 The Enviroklenz works by taking air into the unit. It has a two-step filtration process. First, there is an air cartridge made of a proprietary blend of natural minerals that basically will destroy the mold spores. Any remaining fragments of the mold spores then flow downward to a True-Medical grade HEPA filter which has a UV light shining directly on it.

This unit does not use any Ionizer so it will not emit any Ozone.

Here are the specs on the Enviroklenz Mobile Air System:

The Alen BreathSmart 75i is their newest and best model to date. This air purifier definitely has some upgrades on it. In regards or removing mold odors, the BreateSmart 75i is one of the best. You can get different kind of filters for the system which works to remove a specific odor.

This unit has a built in air quality monitor and changes fan speeds based on how much particles including mold are in the air.

How The Alen BreatheSmart 75i Works

The Alen BreatheSmart 75i uses a 3-step filtration process to collect some of the smallest particles, certainly mold spores. Once the mold spores go through the pre-filter system (which extends the life of the filter), it is trapped by a True HEPA filter.

This air purification system does have an Ionizer and is CARB approved.

Specs of The Alen BreatheSmart 75i:

Click Here For Review and Pricing Of Alen BreathSmart 75i

The Airocide APS-200 is completely different from every other air purifier on this list in that it does not use any filters. Instead, it just completely destroys mold spores and other airborne particles.

Airocide uses technology created by NASA that was originally made to preserve food in space.

It’s very little and lightweight. The Airocide 200 is actually really cool looking too. Truthfully, it doesn’t even look like an air purifier. You can just put it in your entertainment system and it will look like part of the surround sound system!

How The Airocide System Works

Instead of collecting the spores on a HEPA filter like other air purifiers, the Airocide 200 has a fan that takes in airborne particles and brings it through two catalytic reaction chambers which destroys it. The composition of the particles is completely broken down.

It does not emit any ozone and is CARB approved.

While it does not have any filters to change, there are bulbs that need to be changed once a year.

Here are the Airocide APS-200 specs:

Click Here For Review And Pricing For Airocide APS-200

The Rabbitair MinusA2 is an amazing air purifier if mold is your concern. It’s also one of the most attractive looking air purifier. You can also get a custom a cover on it such as art work such as the Mona Lisa or Hello Kitty and have it blend in to your house. Besides from looks, it’s also a very solid product.

It does have the negative ion generator but it is indeed CARB approved.

How The Rabbitair MinusA2 works 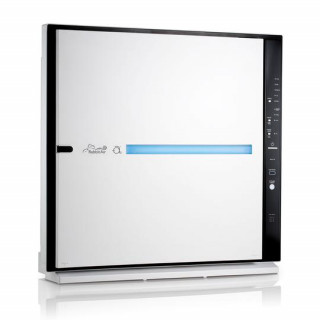 The Rabbitair Minus A2 has an intake which brings the mold spores through a six filter filtration system.

These six layers work like clockwork in trapping particles that are super tiny. Even smaller than the standard 0.3 microns that most air purifiers collect.

Here are the Rabbitair MinusA2 specs:

Click For Review And Pricing On The Rabbitair MinusA2

In terms of value, the Medify MA 40 2.0 is extremely high on the list. While it doesn’t quite have some of the added features of the other air purifiers, it has an added benefit:

But I refuse to call it cheap because there is nothing cheap about this air filtration system when removing mold spores. 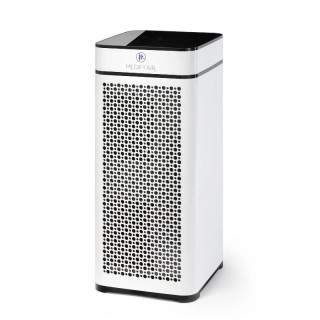 The Medify MA 40 2.0 has a four levels of filtration to remove mold spores and fragments from the air. It uses a pre-filter, H13 medical grade True HEPA filter, a carbon filter, and anion generator.

Spores enter the front grill intake, larger particles such as pet dander are supposed to be captured by the pre-filter and then the smaller particles like most mold spores are captured by the H13 HEPA filter. The carbon filter removes odors while the negative ion generator can help remove particles from the air. The unit is CARB approved.

Click Here For Review and Pricing For Medify 40 MA 2.0

While there are many other good portable air cleaners on the market, these are the five best air purifiers for mold.

Some have better features than other but the bottom line is if you have a mold allergy, any of these five systems should be able to help.

If you purchase one of these units and they don’t help, it could indicate either you have a larger mold problem in your home that may require mold remediation or it may be something other then indoor air quality that is causing your allergy issues.