One of my favorite air purifiers for mold is the Enviroklenz Mobile Air System. There are two models, with the UV light and without it.

There are reasons why I prefer the UV light, which I will go over in this Enviroklenz review, but one thing is for sure, this system with or without the UV light is one of the most powerful air filtration systems on the market today.

It’s kind of lacking the upgrades that some of it’s competitors have, but the purpose of getting an air purifier is to clean the air and not many (if any) do it quite as well as the Enviroklenz.

Enviroklenz states that the technology was originally designed for chemical warfare decontamination, so it is a very powerful unit. Even better than that, this system was made in the USA.

So, let’s go through this Enviroklenz mobile air system review and learn what makes it so great and what it lacks. 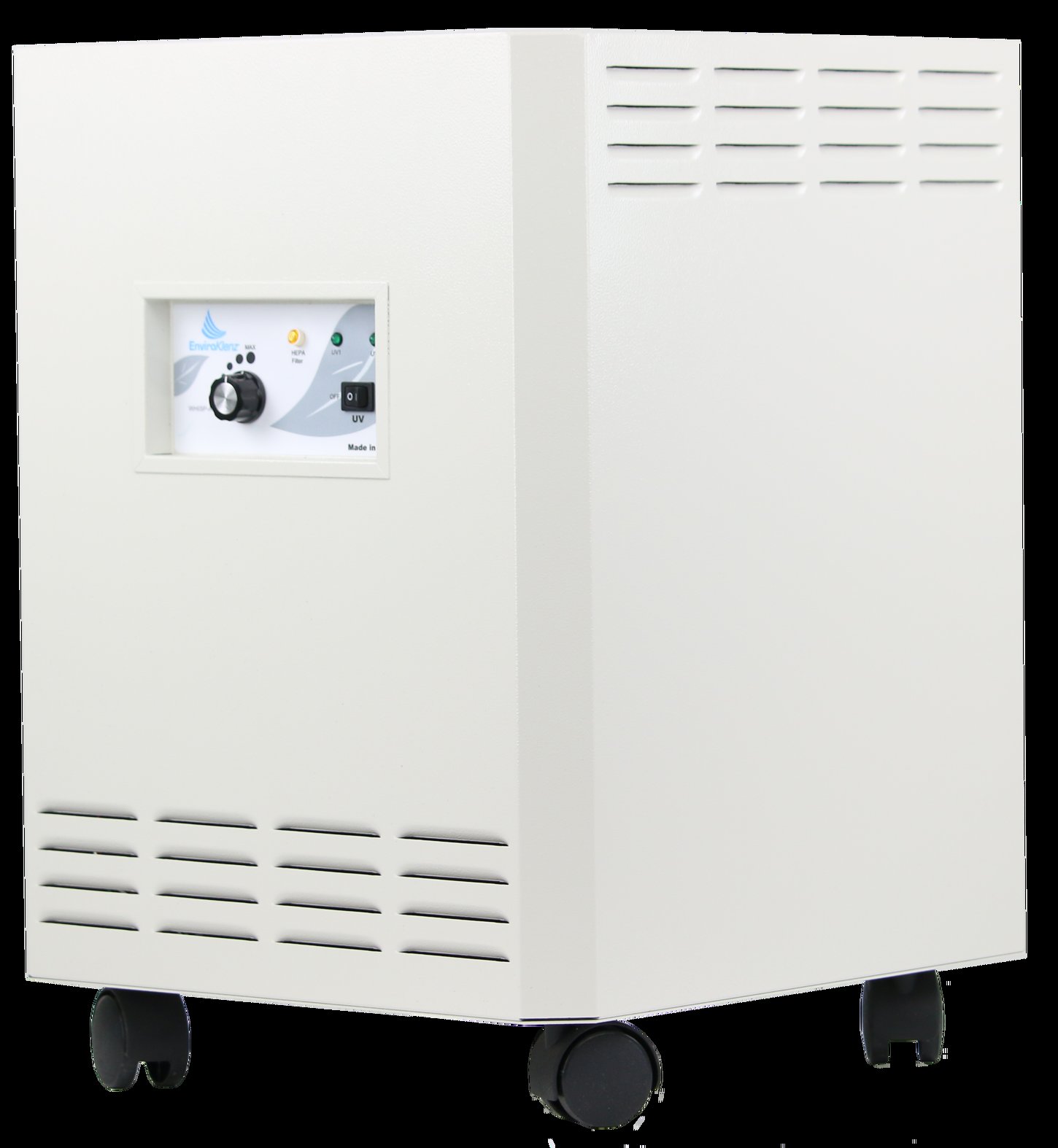 The Enviroklenz looks like what you would picture a traditional air purification system to look like. It’s a square metal coated item that rests on the floor of your home with a power cord and wheels to transport around.

Everything that makes this device awesome is concealed behind metal with the blower, filter, UV lights, etc.

There is an access panel where you can change the filter and lightbulb as needed.

Everything you need to turn on and off the system is on the front in the form of a 4-speed dial and power indicator.

I’m going to level with you:

The Enviroklenz is not quite as stylish as other units such as the Airocide APS-200 but what this mobile air system lacks in look, it makes up for it in results.

It also comes in two colors: Black and white.

While the Enviroklenz Mobile Air System is clunky, it’s not as big as you would think.

Here are the dimensions:

When it comes to sound, the Enviroklenz lacks compared to some of my other favorite air purifiers like the Alen BreatheSmart 75i and the Rabbitair MinusA2.

The Enviroklenz Mobile Air System has four levels you can put it to. Here are the levels and the amount of decibels each puts out:

To compare, when put on it’s highest setting, the Alen BreatheSmart 75i is only 49 Decibels. So, the Enviroklenz is considerably louder.

The coverage area according to the manufacturer for this air purifier is said to be 1000 Sq. feet.

The Enviroklenz Mobile Air System is equipped with a True-medical grade HEPA filter. The HEPA filter this system uses captures airborne particles down to 0.3 Microns in size.

Enviroklenz recommends that their filters be replaced every 18-24 months.

So, this is where the Enviroklenz gets really good!

In addition to having the HEPA filter, it also has an air cartridge.

You are probably thinking, “what’s the difference?”

Well, the true-medical grade HEPA filter does a great job is capturing airborne particles but it’s not actually going to remove odors.

That’s where the air cartridge shines.

It captures chemicals, odors and other liquid vapors are caught and neutralized through a process Enviroklenz calls Adsorption Neutralization.

These cartridges need to be changed every 5-6 months for the best possible performance.

On top of the True-medical grade HEPA filter and air cartridge, the Enviroklenz Mobile System also has UV lamps.

The UV light is in place above the HEPA filter.

While the HEPA filter is collecting particles, the UV light is continuously shining directly on and destroying all the mold spores and other particles.

One often misconception of UV-lights is that it kills all microorganisms on contact, and that’s simply just not true. Time is needed for UV lights to do its job properly.

I really only like to review companies that stand by their products.

Enviroklenz is no different.

They have a 30-day money back guarantee, no questions asked.

There is also a full 5-year mechanical warranty.

Because the Enviroklenz Mobile System is a high-end air purifier, it’s obviously not going to be cheap.

However, based on its competition, I think it’s priced quite well!

The replacement cartridges and HEPA filters are $99, but if you put them on auto-refill they are $79.

How The EnviroKlenz Works

Since reading this Enviroklenz review, you now know all the moving parts, but I’m going to put it all together so you can see how it works.

Airborne contaminants enter from the top intake of the unit and flow in through the Enviroklenz air cartridge. When the airborne particles enter the cartridge, it gets destroyed or neutralized by their patented blend of minerals which are: • Magnesium Oxide • Zinc Oxide • Titanium Dioxide This is truly what makes this unit special because it uses Earth minerals and doesn’t let off any other chemicals when destroying microorganisms as some other air purifiers do.

The particles then flow through the True-medical HEPA filter and get collected.

Just like every other product on the market, the Enviroklenz has some pros and cons.

In this Enviroklenz review, you learned all the great things about it.

If you are really worried about mold, the Enviroklenz Mobile UV Model is really top-notch. Sure it doesn’t have a futuristic look or upgraded features such as a mobile app, what it does do is clean the air really well.

Isn’t that why you buy an air-purifying system?